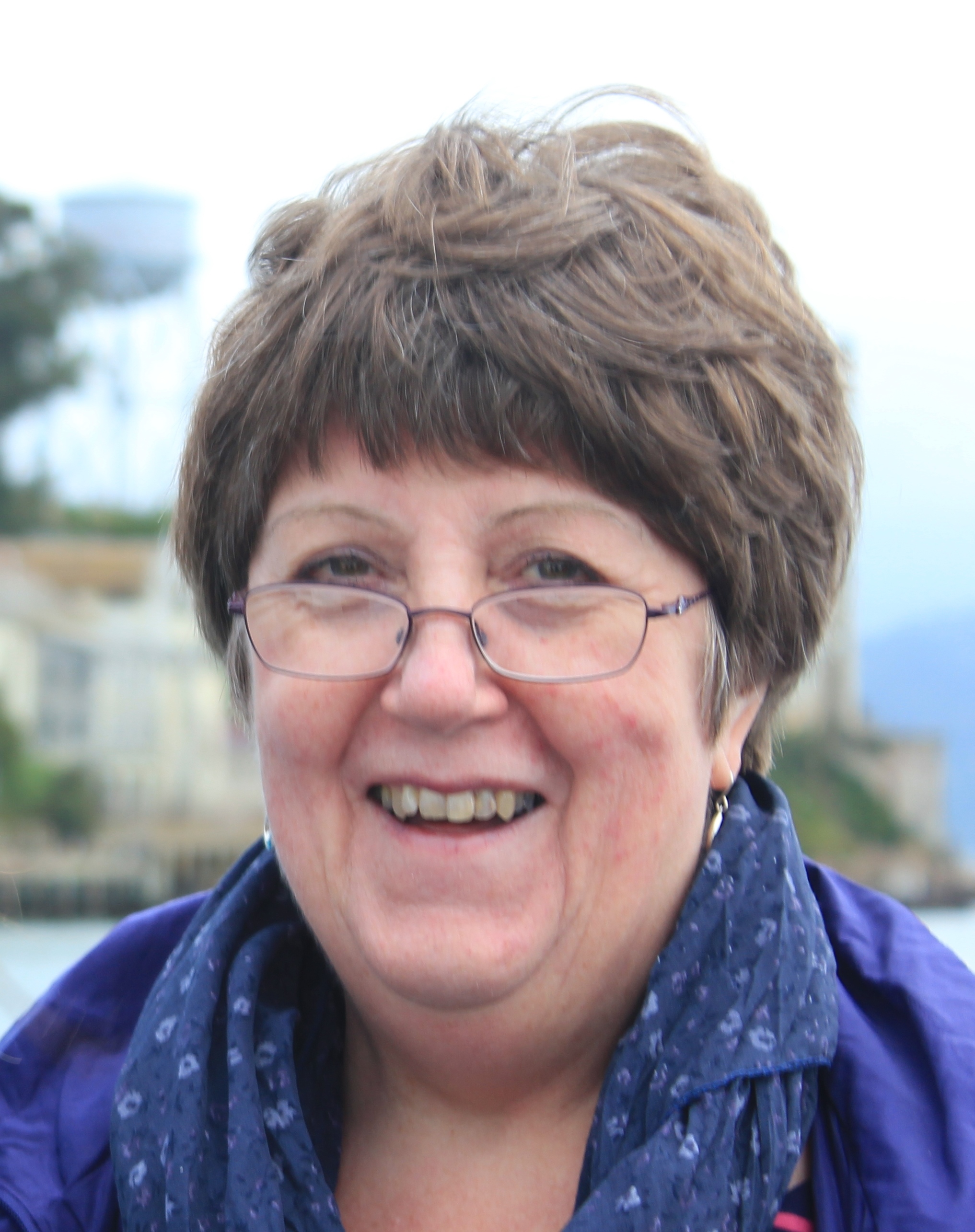 I love colour, pattern and texture, bold and subtle, regular and abstract. When did I start relating these ideas to textiles? From childhood I learned to sew, both decorative and practical items. Fabric and thread were constants in my life, doing embroidery and dressmaking then learning to crochet and make curtains (for the many houses Ive lived in). My first quilting was done in the early 1980s then creativity took a back seat as job (unrelated) and family took precedence.

More recently I’ve been exploring textile art in its many forms and my creative preferences are strengthening. So what am I? Quilter? Embroiderer? Patchworker? Stitcher? Textile Artist? 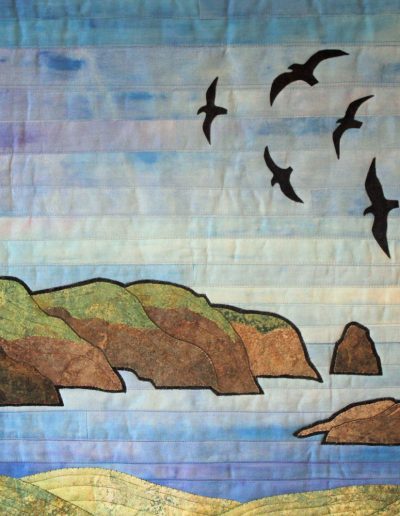 The quilt was made using a technique taught by Gloria Loughman at the Region 16 Quilters’ Guild Residential Weekend at Stirling in June 2019. The sea and sky are made from hand painted fabrics, cut into strips and reassembled to suitable effect. The land is made from a commercial fabric bonded onto black fabric to provide depth and perspective. 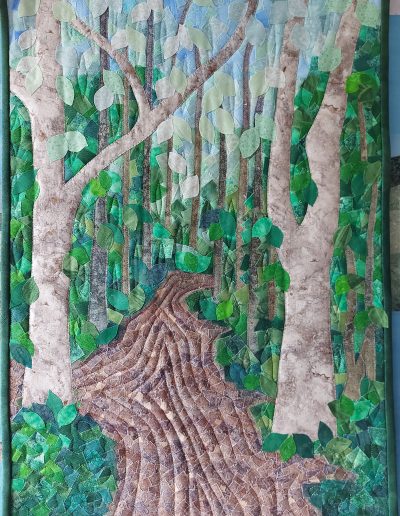 This path through woodland was inspired by my daily walks at an Edinburgh park during lockdown one in Spring 2020. The main structure of the woodland was planted in the late 19th Century to create a circular walk around a small private estate, now in the care of the City of Edinburgh council. I enjoyed following the path round the bends, each revealing new sights. Walking in nature helped to offset the disadvantages of being locked down.

Confetti piecing onto a fusible background with bonded applique. 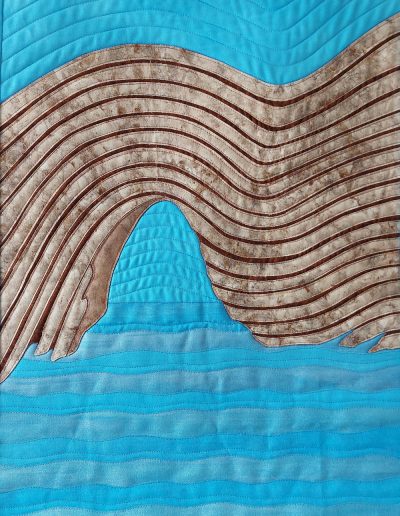 Hand painted fabrics, pieced for the sea and sky. The rock strata were cut from one piece of light coloured fabric and raw edge bonded onto a darker background. Quilted with a variety of space dyed threads. 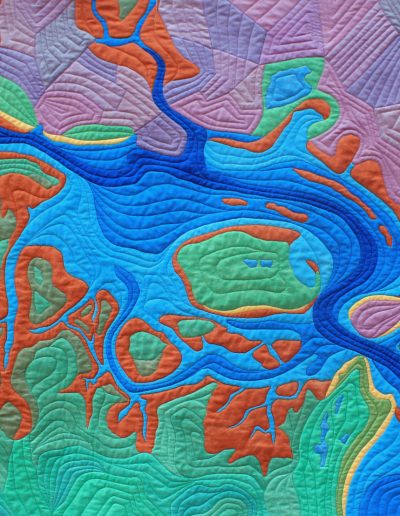 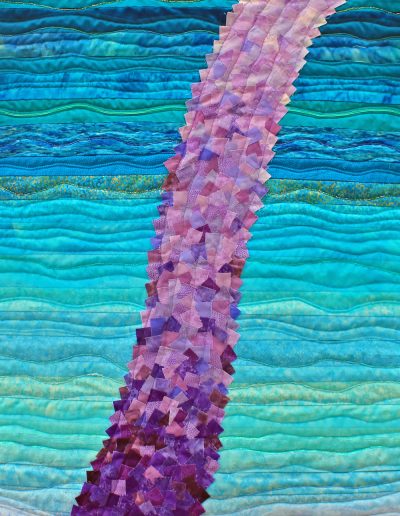 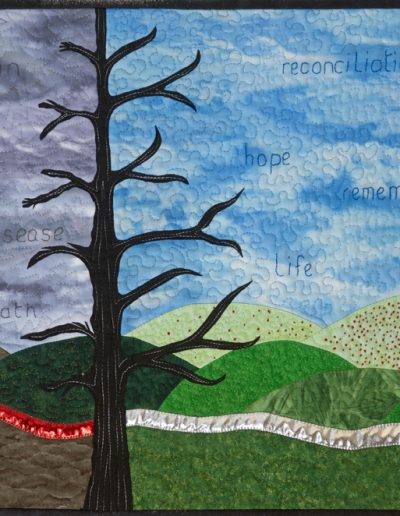 This quilt was made to commemorate the centenary of the end of World War One which was a time of reflection for many, mourning for those whose lives were lost – represented by the ghostly ‘Tommy’. The tree represents the broken, damaged past, and the healthier future. The destruction of farmland disturbed the soil, producing poppies, now an iconic an item of remembrance. There was also hope for a better future in a time of huge social change. 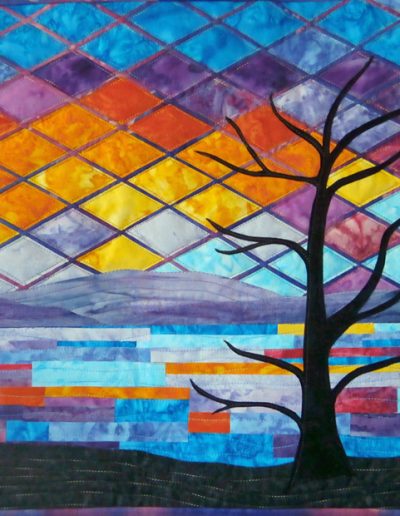 On the hottest day of early summer I took a photo of the scene across the Firth of Forth from Silverknowes, Edinburgh at sunset and used it as the inspiration for this quilt.

The quilt was made using the tiling technique taught by Gloria Loughman at the Region 16 Quilters’ Guild Residential Weekend at Stirling in June 2017. Commercial fabrics are ‘fussy cut’ into diamonds and narrow strips and bonded to the background. 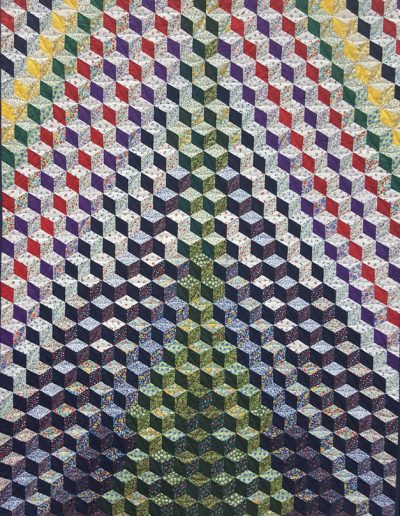 The visual illusions created by the Tumbling Blocks design fascinate me. I love hand sewing so I enjoyed slow hand piecing with no deadline. I also love the small floral prints that became available with the resurgence of quilting in the 1980’s. Made with the traditional English Paper Piecing technique. Machine quilted.

Won Gold in the Traditional section of the Scottish Quilt Show, Glasgow, 2018. 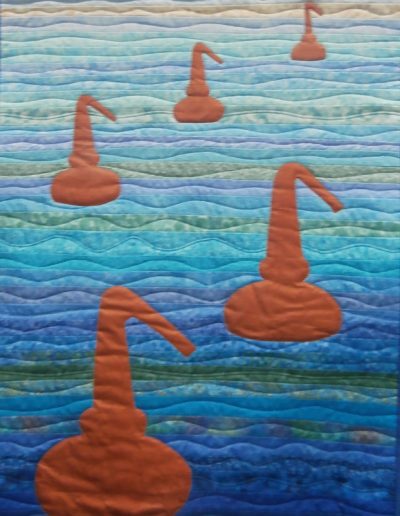 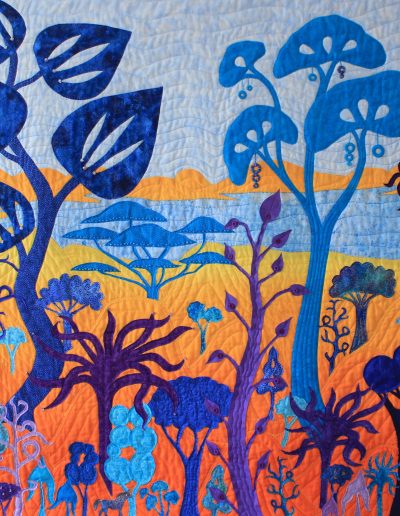 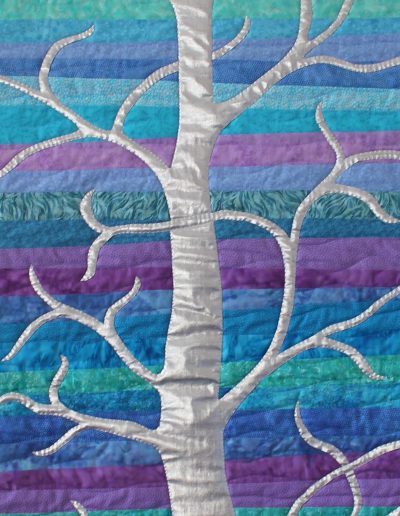 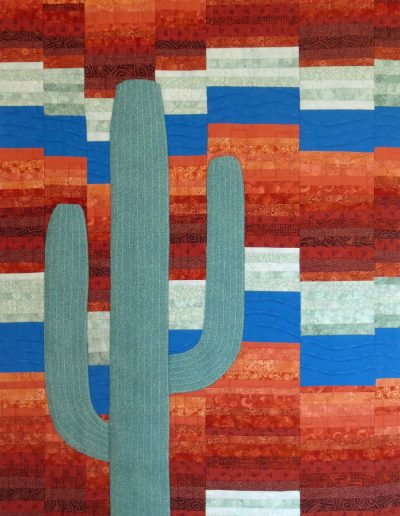 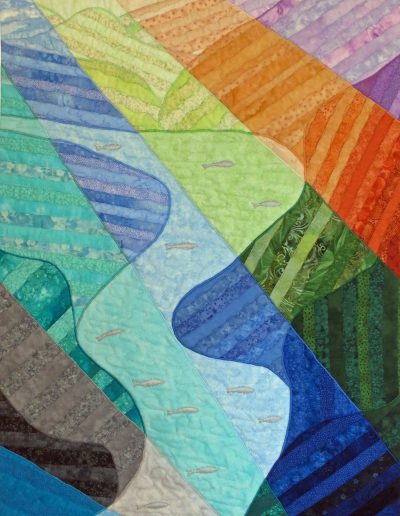 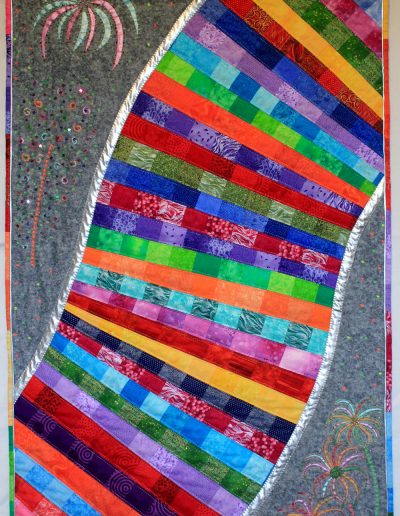 The highlight of any carnival, rows of participants in brightly coloured costumes parade along a route on foot or on vehicles extravagantly festooned with coloured lights and decorations, the whole event accompanied by fireworks.

Made for the Theme Challenge at Glasgow SECC March 2016 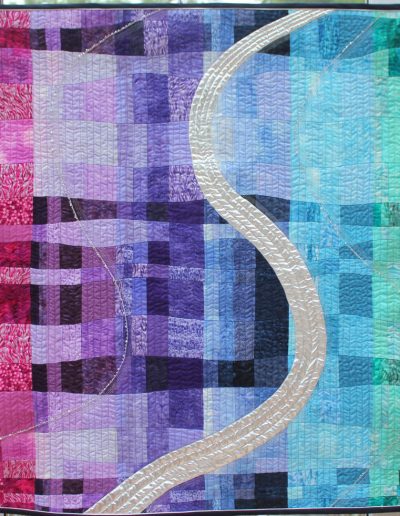 Themes of movement and progression are explored within the cool colour spectrum. Vertical strips cut to proportions according to the beginning of the Fibonacci sequence hint at progression. I used curved horizontal seams and the silver ‘river’ echoed in quilting, couching and beading to explore movement. 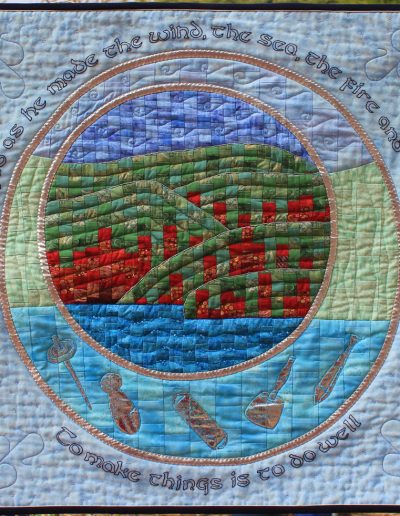 My inspiration came from the idea of fire from within the earth, forming rocks which are the foundation of a landscape able to support farming and industry despite, or aided by, the effects of wind and sea on a northerly island.

The circles focus on the 4 elements – wind, sea, fire and folded hills. The centre is detailed, representing the complexity of that environment, whereas the outer circle reflects the ‘big picture’ and the strength of local occupations.

The extract from the poem is hand embroidered in dark navy blue using a simple back stitch to outline a Celtic style font (relevant to the Orcadian origin of the poem).

The sections in the circles were pieced in the Bargello method.

The bias cut silver rings were added like bindings then that circle appliquéd to the layer beneath.

Tools relevant to the trades referred to in the poem were quilted in outline and some had silver foil added using the Bondaweb method.

Other quilting in the circles reflected the elements.

Beads were added to detailed sea and wind sections.

Silver was used to give an impression of the brightness found in the islands due to reflections off the sea. 30″x 30″ 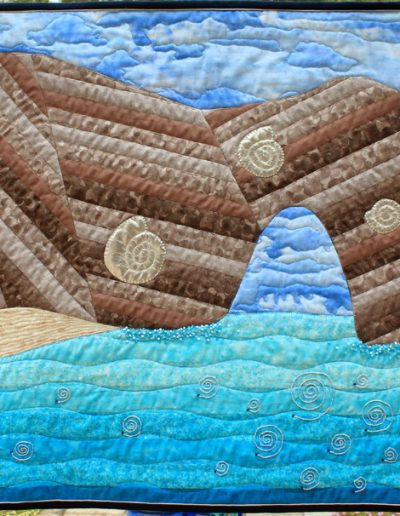 Soft sea bed sediment in Jurassic times crosses borders over millions of years to become hard rock strata above sea level. The rock strata become contorted by slow movements of the Earth’s crust. The coastline is the border between land and sea. The rock strata determine the strength and shape of that coastline which in turn determines the speed at which the sea crosses the border and changes it – creating cliffs, arches and sea stacks. Ammonites cross the life/death border – live creatures swimming in Jurassic seas die, sink to the sea bed and become fossils found in the rock strata. 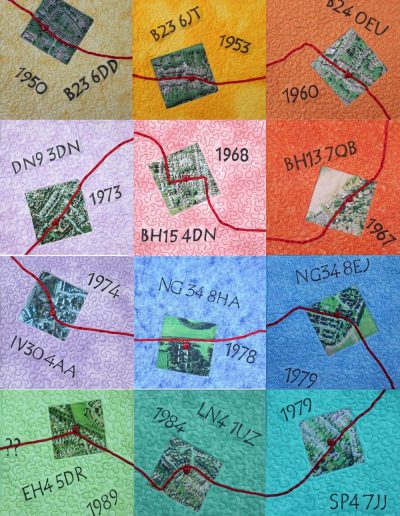 I looked at my past homes from a spatial perspective. An aerial photograph evokes memories of the immediate surroundings. The postcode and year are reminders of the wider area and my life there. Commercial fabrics with photo printed from Google Earth. 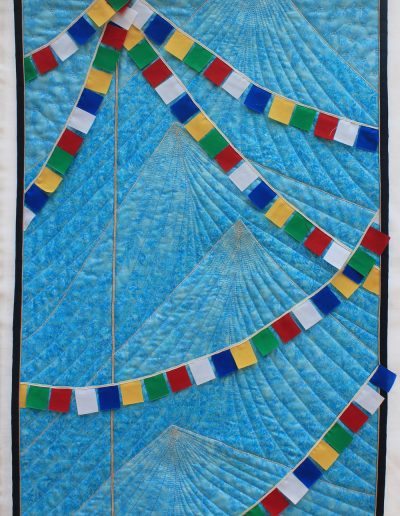 Messages from the Roof of the World 2015

Tibetan elements are denoted by colours seen in the prayer flags widely hung throughout the Himalayas. Messages of hope and support are transmitted across the mountains and valleys by strong winds which eventually cause the flags to disintegrate.

Elements and their representative colours are blue – sky, white – air, red – fire, green – water and yellow – earth.  The colour order of flags is traditional, but symbols and print used on full sized flags are omitted to avoid offence by inaccuracy of representation on a small scale. Mountains are marked with couched threads and emphasised with quilting. Shading is created with water-based pigment. 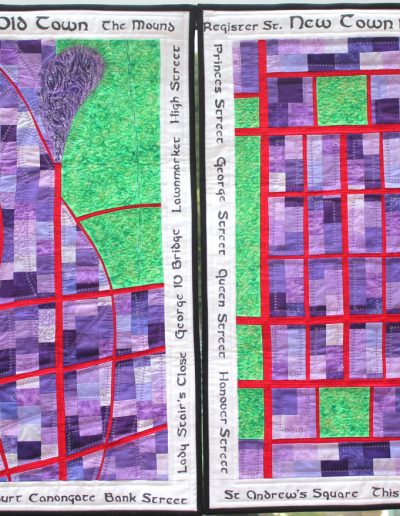 As a Geographer I am fascinated by the contrasts in layout of the two iconic areas of Edinburgh. The Old Town has a random layout developed over centuries and determined by the shape of the land. The New Town, on flatter land, was planned in the 18th Century and has a regular rectangular layout.

The piecing and quilting was completed by machine, using purple and green – the colours of Scotland’s thistles. The black and white border features a Celtic style font to show many famous street names, lettered by hand with a fabric pen. 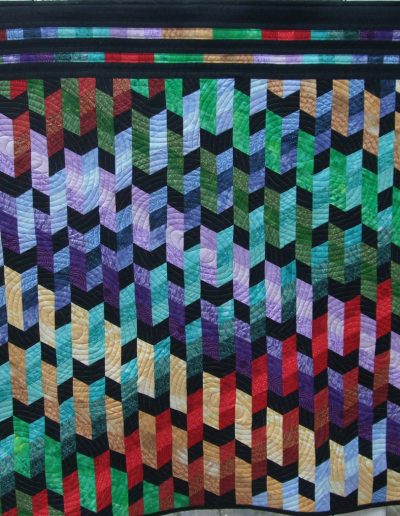 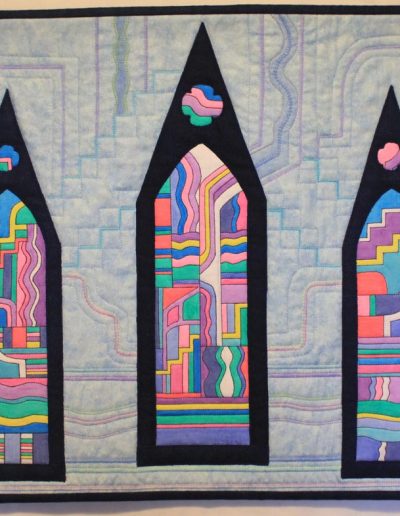 Inspired by St Mary’s Episcopal Cathedral The strong shapes of the Victorian Gothic spires (darkened by pollution) contrast with the bright delicate patterns in the modern, stained glass Millennium Window by Eduardo Paolozzi which is set within traditional stone arches.

The cathedral spires form a focal point in Edinburgh’s West End and cast large shadows over this part of the New Town.

Made for the Thistle Quilters 2015 Chairman’s Challenge – Auld Reekie 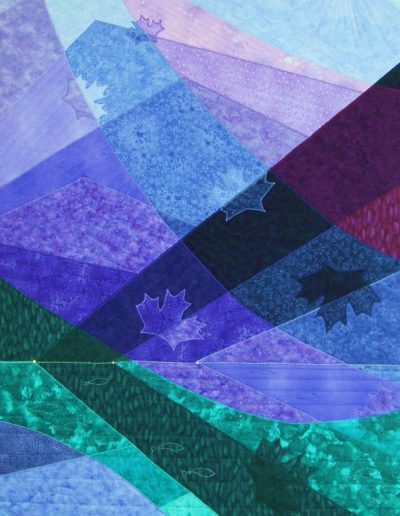 My interpretation of the theme ‘Reflections’ at Pat Archibald’s Creative Journey Class. 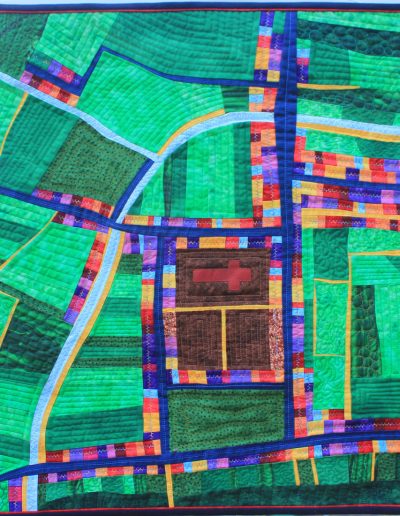 This reflection on a village in the Derbyshire Peak District was completed after a class with Alicia Merrett at the Contemporary Quilt Group Winter School 2013.

Random piecing in bright colours represents buildings and roads surrounded by green open land and a river. Curved seams reflected the reality of lines in an ancient English village. A variety of free machine quilting patterns were used for different land uses.